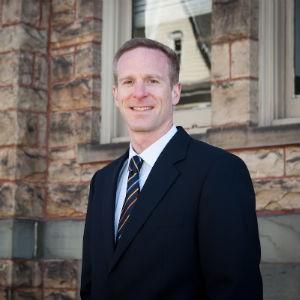 Raised in Stroudsburg, Todd attended Dickinson College where he earned a bachelor of arts in English. He earned his juris doctorate from the University of Pittsburgh and was selected for the Order of the Barristers.

After law school and working with a southwestern Pennsylvania law firm, Todd returned to Stroudsburg where he was an associate at a local law firm. He has focused much of his professional practice and outside time on the community where he lives with Gretchen and their two children.

Todd represents municipal bodies across Monroe County, including boards of supervisors, a borough council, planning commissions, zoning hearing boards, building code appeals boards. and an authority. In his municipal practice, Todd has guided and worked with local governments as they struggle to address the demands of a growing and ever-changing community.

In addition to his municipal work, Todd serves as one of the Monroe County custody conciliators, where he mediates conflicts between separated parents and makes custody recommendations to the Court. Todd is also able to focus on the needs of children in his role as the Dependency Master, where he hears all Children and Youth review matters and makes recommendations to the Court.

Outside of his professional practice, Todd shares his time and experience on several local non-profit boards. He is a member of the Salvation Army Advisory Board, the Act 137 Affordable Housing Board, the FC Pocono Soccer Club Board, and is an associate trustee of the Weygadt Trust of the Minsi Trail Council of the Boy Scouts. Todd has served as the past president of the Board of Directors of the Eastern Monroe Public Library, and in 2013 received the Alfred D. Sumberg Founder’s Award as a member of the Board of Directors of the NEPA Community Federal Credit Union.